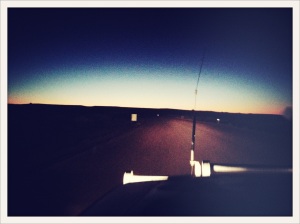 What’s Rangoon to you is Grafton to Me is a 45 minute psychedelic gonzo radio rant from 1978, courtesy of Russell Guy. It is gold. Solid gold. And it is my companion this strange winter’s night in the Bogan Shire:

“I was just waking up when the front tyre went; at the same time a horse appeared and the headlights went and the horizon came through the windscreen. I said goodbye to Eartha Kitt and left the road like a jumbo jet diving into a swamp. Some time later I regained a level of consciousness less ugly than the one I left. I’d seen some strange movies on the inside of my eyelids…

This is appropriate listening. Hyped up on sour coffee and tepid meat pies the white lines quiver, the tar bends and writhes like a stick of licorice melting in the sun. The roadside blurs, McDonalds wrappers flicked into the updraft perform delicately and coke cans sparkle like rubies in the long paddock, once the domain of the drovers’ mob.

The swan song of the asphalt is a grunting howl, hot tyres on worn tar, a screeching fan belt, the whump whump of the road trains as they slam past and Black Mary’s strange symphonic whir thump as her weight slews behind her.

Tonight, however, we have slowed to a wheezing stop. Time to taste this world.

We are parked on the edge of the Bogan River, deep in outback NSW. The Bogan Shire has little to do with its colloquial cousin – not an Ugg boot in sight here, though there has been a sighting of a feral flanno. The river glides lazily through the town, swollen and sated, gulping at the sandy banks, sucking a the roots of the gums. Even the whine of tinnies, ferrying salty men clutching coldies and bright-faced smiles, softens to a vague hum in this peaceful place.

Right up until the rednecks arrive shouldering their very particular brand of enjoyment. This bit happens to involve a small shouty child, a knackered canoe, a dog lead and some laconic hollering.

In this languid place so far removed from the scoured, bleached harshness of the desert, the perspective of this trip comes into sharp focus. After a journey depicted in love and laughter, in the Tin Lid’s rapacious appetite for life, his exponential appreciation of the raw marrow of life, and in wine slurped from tin cups beneath an ocean of stars, the sloth-like waters of Nyngan and an intermittent wi-fi signal forge a rose-tinted hindsight.

This is another country, far from the urban sprawl, where the call of the road is a V8 snarl, where stoicism is considered a blood sport and a no-frills-can-do attitude is essential. There is a raw honesty here, a beauty that exists in the sparse utility. There is a dark romance and a hard-edged lust for life.

This is the heart of Australia in all its rich fetid glory:

A lesson in bush mechanics 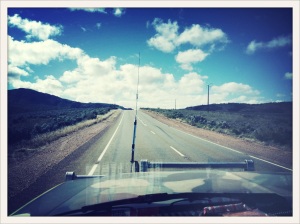 Call of the road

The ultimate hero. And his cattle dog