Cast in the pall of a flickering neon light, with seedy characters skulking in corners, motels wear their atmosphere like a moth-eaten velour death shroud – horror, crime, sex, violence, losers, misfits and hapless humour stains of life in a rundown joint that time has forgotten.

It is the scene for lusty teens charging experimental fumblings to their parent’s credit card and hapless hookers leading their johns back to fake pine laminate and a buzzing lightbulb; it can be the tatty home of resolute despair, a dank weariness infecting all who sleep there. Perhaps even the last resort. 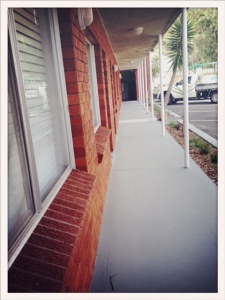 Tip-top spot to take the Tin Lid then.

Decked out in trakky daks and sun hats, boardies, rashies, a smear of zinc and a stash of sunnies in varying degrees of able-bodiedness, we hit Thirroul, a lazy stretch of surf just south of the Royal National Park between Austinmer and Bulli, and its infamous beach motel. Once known as the Oral Eagle Motel (though why is unknown), the joint is the last resting place of Brett Whiteley, who slipped from this mortal realm in the smooth yet unrelenting grip of a heroin overdose on 15 June 1992, aged 53.

Much was reported at the time:

His squalid death in room four of the Beach Hotel

The coroner’s verdict was ‘death due to self-administered substances’

But this is my favourite – it seems to say so much more than the others, that perhaps the end was well-flavoured:

And as luck would have it, we are in room four. There are no ghosts. No Lang’s Supreme by the bed. Just some unprepossessing art and ‘contemporary’ finishes. I take a picture of a picture of a 4WD raging up a beach for the Cowboy, deep in the knowledge he will appreciate this.

And then we hit the sand in a flurry of small feet, the Tin Lid joined for the jaunt by his besties, two dark-haired beauties whose sisterly bond has stretched to include him. There is a requirement for chocolate Paddle Pops, accompanied by deep sighs of patient waiting:

The crackling, squeaking sand shifts with impatience, enticing us down to the edge, where the world falls away in a plume of spray.

Slung between the steep foothills of the Illawarra Escarpment and the surging Pacific, Thirroul is an exposed beach and reef break shafted with rips and thumpingly reliable surf. It also has rocks, sharks and bluebottles, quicksand, drop-offs and a pool-pipe outlet.

The Tin Lids play safe, back from the edge, happy to watch mobs of neon-suited surf lifesavers cresting waves in rubber duckies, exhilaration foaming in their wake, and the laden bulk of a container ship as it hauls itself towards a distant horizon.

The beach is a glorious indictment of Australiana, rich in a raw pride that is wreathed in a sense of weathered gratitude. An old fella sits up from his sandy slumber and calls out to the Tin Lids: “Youse ‘aven a good time kids? Good beach ‘eh? You tell ’em, come to Thirroul, it’s a good place. Right?”

Flocks of gulls soar and dive, stiffening less-than-hot chips their object of affection. The lazy M-A-T-E  M-A-T-E of their call to arms hangs in the air, feathers drifting on the breeze like snow. Miss Woo points out that the seagulls are not listening to her. The Tin Lid replies, “that’s ‘cos they don’t have ears…” 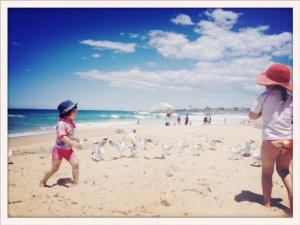 But best of all, the southern end of the sands are home to this: 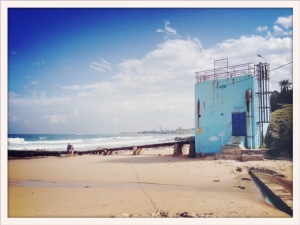 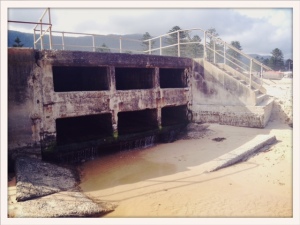 Rusting into dereliction, flakes of iron burnt black by the tide, the pipes strain to be free of the pastel pumphouse that stands sentinel over craggy rocks. Like aging arteries, the pipes funnel water, that clangs impatiently at its enforcement, to and fro from the ocean to the pool, a salty circulatory system that booms and hisses like a caged beast. 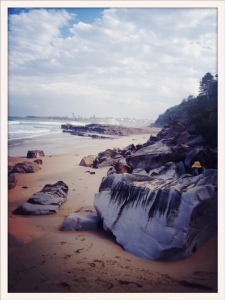 But it is the striated rocks, striped with ochre, that hold magic for the little people, an adventure waiting to happen. Bottle tops, nets, sand crabs and bailer twine, stones, sticks, shells and sand are soon treasure to be claimed and bartered, the highest rocky pinnacles a crows nest that gazes out to a stormy sea full of marauding pirates…

It takes some time to entice them from their realm…

But promises of hot chips of icy cold lemonade sift through the myopia, and the tribe are on the move again, hot-footing it up a cooling beach, long shadows damp underfoot.

In changing rooms that sigh nostalgically of the past, wet swimmers slap on the floor and hot-chip eating attire is shrugged on over wet shoulders. 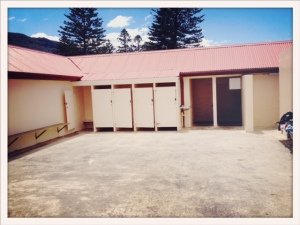 And after a cursory glance at the ocean pool, a still-life in dappled light, we hit the street with sun-tight skin. 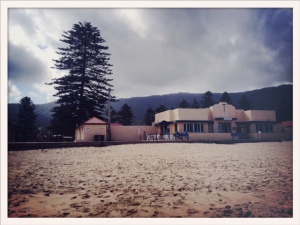 The pub is mottled in neon candy – screeching peach, lime soda and acid lemon float around perma-tanned bodies atop towering heels that stab the worn boards with staccato precision. It’s a girls’ night out, stiff with perfume and high-pitched crescendo. The surfers are looking up though, faces bright with anticipation of the chase…

But sated at last, the little people are finally in need of a little motel dreaming, so we weave our way past an eclectic rabble of consumerism, including these little gems:

The Tin Lid’s Nana remembers Thirroul in 1945, a day-tripper’s delight; “bowling down the Bulli Pass in a ’39 Chev with seven people, picnic baskets, blankets, soggy salad sarnies and homemade ginger beer that popped in the bag in the boot”.

His memories will be of the motel, with its sachets of sauce, sprinkles of sugar in a pushed-together bed and jam sandwiches in the middle of the night. Of waking to find his mother slouched out the front of the darkened room, sipping a glass of blood-red wine on the forecourt. Of sand in the shower, a bright-eyed dawn and hot concrete.

With my back to the still-warm wall of room four, the Beach Motel gives me a deep sense of comfort as it cradles my boy back to sleep. Its retro facade and lurid tales lend a sense of the macabre, of a joint that time forgot. But time is here; it is languid and slow, and stretched gossamer thin as the light dies. 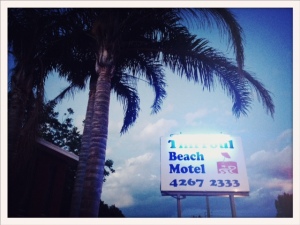 2 thoughts on “The last resort”