My beautician – a woman with deep reserves of beauty and guile, an abiding love of cherry red Mixmasters and the proclivity to whip up a salted caramel body butter at the merest hint of dry skin – suggests we meet at The Olympia. 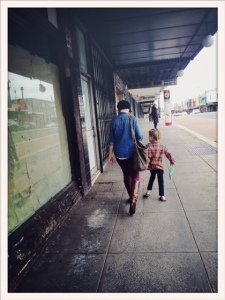 Through concertina doors we spill into the gloom, the Tin Lid’s chatter silenced briefly, replaced by his breathing, suddenly audible and rapid.

Lodged in the gullet of Parramatta Road, Stanmore, the Olympia Milk Bar is the stuff of legend. It is papered in memory, glued together by nostalgia and flapping tape, and within seconds I can sense the layers of story and tale, myth legend and rumour rife. The Beautician lays a perfectly moisturised hand on the formica table and asks what we’re having? The Tin Lid needs no further encouragement and quickly finds his voice, stumbling over itself to order a caramel milkshake. I order tea… 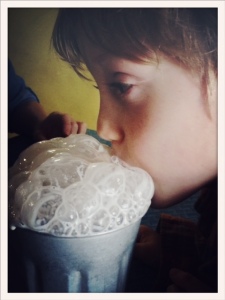 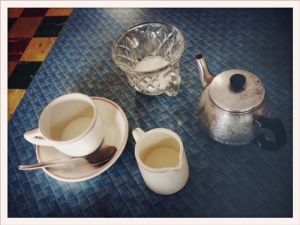 She has been coming here for years, since solo Sunday dates to the Stanmore Twin to watch the $10-double screening at the age of 15. That was in 1991, and in those days the Olympia was fully lit, with chocolate in the display boxes that now lie barren, flapping disconsolately in time with the tape. The owner was moribund then, she reckons, watching warily from behind the counter…

I dig deeper, curious about this curiosity, scratching a surface rich in supposition, like the skin on gold-top milk, taut with creamy expectation. A social media swoop offers up the Olympia Milk Bar Fan Club on Facebook, complete with over 2000 members. Woven into the threads are warnings to show respect to the proprietor, a Mr Fotiou, who has often asked no photos be taken of the place.

The Beautician says she can see the old fella, over the Tin Lid’s shoulder. He can see my interest, and watches as I capture this shadowy world on ‘film’: on this occasion, he seems to take no offence.

I mean no disrespect Mr Fotiou – this space, your space, is an arrhythmia, a staccato beat within the daily drone. It is a thing of quiet, faded beauty, patterns repeated until the lino wears so thin it shines. 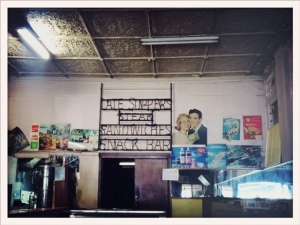 And in this space is the rubble of a life picked through by time. I know as little as everyone else about Mr Fotiou’s story, and he remains tightlipped, serving the added-on ham and cheese sandwich to the table in mute fashion. The notes he returns with, to balance the red twenty I hand him, are cool and folded, from deep within his apron.

Originally a billiard room – part of the skating rink that once stood next door, the previous incarnation of the cinema, now, too, ripped out at the roots – the Olympia Milk Bar opened in 1939 in association with the Olympia Picture Theatre, which replaced the skating rink. It was, in turn, replaced by the Stanmore Twin, upon which site now squats cookie-cutter apartments that jar against the history of this place.

Upstairs was once a hair parlour, known as the Olympia Salon, and reportedly run by Mr Fotiou’s wife and sister-in-law. Because Mr Fotiou has not always been the sole proprietor, alone in his workplace in the dark. He had a brother…

According to Janice Rowe, who skated at the rink in the ’60s, the Fotiou brothers who ran the Olympia – John and Nick – knocked through the walls so the skaters could slide up to the counter without having to leave the rink. Turns out it didn’t work out so well, with plenty of spilt milk and bruised pins, so the wall was reinstated, the skaters forced to remove their skates before ordering a milkshake.

There were glory years for a while, the Olympia packed with milkshaken teens and bursting with light, laughter and sound, crowded with late supper-eaters and smelling of steak.Those times didn’t last, though. they rarely do.

Legend has it that one of the brothers made a promise to the other on his deathbed, to never change anything of the milk bar that they once ran together. Which explains the vault of faded history on display, and why no-one knows if Mr Fotiou is Nick or John… 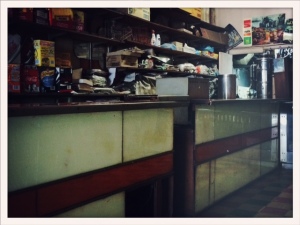 Some people consider the Olympia a glitch in the matrix, a haunted spectre of a long-dead age.  And they may have a point: George Poulos – known as The General – was the proprietor of the Olympia’s sister milk bar in Summer Hill, The Rio. He recently tumbled from this mortal coil, aged in his 90s and his death marks the steadfast passing of an era, finite resources from the past sifting away on the winds of time. 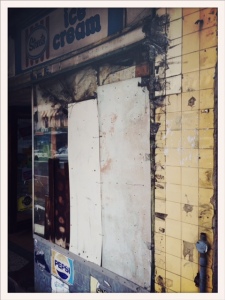 But to those of us who treasure the dank dark corners of the past, who relish a boarded-up beauty and the quiet solitude of a man who knows not only many ages but the bus timetables for Parramatta Road, the Olympia is a haven. Long may she last.