Toting dancing shoes and a sultry smile, the Bestie is in the mood for sport, which in itself is unusual as she has a less that polite attitude to all things sporting – unless you include wagers or card-sharking.

The Tin Lid, however, knows exactly what’s going on. In his bright little mind, dancing is sport, as is snorkelling, lemonade drinking and Lego. And he is ready to roll: 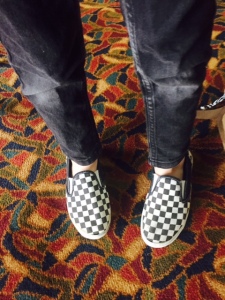 Overlooking Varna Park in the rarefied suburban sweetness that is the east, Bronte Women’s Bowling Club* is proudly defiant – she wears her hair well styled, pinned and primped to perfection with not a strand out of place, and her stance is impeccable, that of a romantic heroine glancing over her shoulder with a knowing smile.

She is well attired too: a cloak of faded glory, lawns that fan out like a fluted skirt, and undergarments that are both appealing and restrained, like patterned bloomers…

Exhibit A: The Queen

Exhibit B: Bain-maries in military formation beneath a natty bunting string

But as every open space – no matter how slim – from the coast to the inner west is now prime real estate eyed by slick-set developers with lupine snarls, clubs have been forced to become increasingly creative in their multi-purposing. And this old lady is no exception.

Childcare centres, markets, gyms, alfresco dining spots, community gardens, yoga on the green, outdoor movies, corporate events, Christmas parties, weddings, barefoot bowls and – heaven forbid – bocce**, these old ladies are dancing a fine line between commercial reliability and wrack and ruin, with many forced to sell off their skirts to pay their way.

At Bronte, a large-scale development glares over one fence, and a childcare centre and car park creep closer at the edge, a phalanx of shiny vehicles static in the face of the grassy endeavour in front of them. Yet she remains resolutely old-fashioned, this grand old dame, brandishing glamour and grit in equal measures.

And while Cobar Memorial Services and Bowling Club has to suffer the indignities of a remote control car track carving up the now-bald third green, at least here the hydrangeas are stout and the view is winsome. 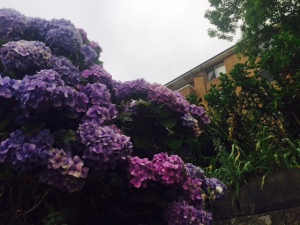 To keep afloat, clubs have been forced to be more open and innovative too, allowing social and (gasp) temporary membership. At Bronte the whites are off, kids and dogs are welcome, the bar is manhandled by a large man dressed wholly in nylon, who, while less than effusive, sells cold beer cheap, and the bistro is expertly pan-handled by a Greek couple who kiss as much flesh as they batter… 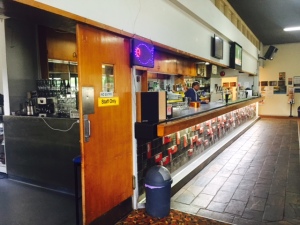 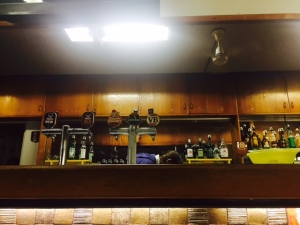 Perhaps the bubbler has seen a little less use of late, but the tablecloths have a military precision, the chairs are safely corralled (you can’t trust early 80s chairs, they are thoroughly deviant), the dance floor is shining in anticipation and the carpet is busy making a profound statement on late-20th century fashion clashing.

As for the Ladies, it is a nebulous light aqua dreamland that might possibly have swallowed my mind whole… 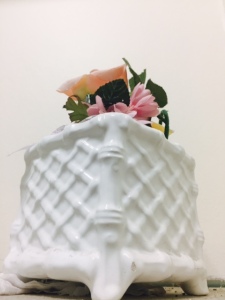 The Cowboy reports in with sherbert-scented amenities and flanks of shiny trophy shields mounted on pine, and the Tin Lid has found not just a fish tank but a flower for the Bestie’s hat and an uncanny ability to throw coasters.

But the main attraction here is the promise of sprung boards skiddy with talc, the hammering of twanging ivories and the bellow of a double bass, courtesy of a rollicking swing band and West Coast swing dancers who spring and catch each other in a flurry of laughing movement.

Unsurprisingly, the six-year-old is impressive, which further adds fuel to our fear he may be set for a career in musical theatre. Not such a bad thing perhaps, but the practice years may leave their mark as anyone who has heard Dammit Janet! sung at full volume every hour on the hour will know.

His performance, which includes cronking, crumping, wrist-flicking and stomping, fortunately, avoids twerking or interpretive moves, but he is readily awarded a shout out from the vocalist and free ice-cream from the cheek-grabbing Greek mama in the kitchen. 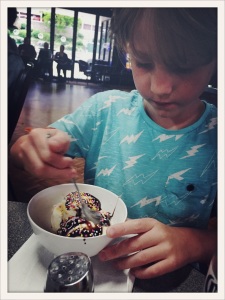 From tattoo-flecked bodgies to toe-tapping nanas, this joint is jumping. I find a middle-aged woman backing out of the Ladies with tiny sheer squares of silk beneath the soles of her shoes. It’s to protect them apparently, and save them for the dance floor. This is a serious business, with big-panted sensibly shod dancers twirling in metronomic rhythm, beaming grins breaking across their faces like wild surf.

The Bestie describes the Bronte Bowlo as “like a dated photo that forgot how to fade”, and while this makes me ponder exactly why I am the one writing this and not her, she is spot on. Caught in the eddies of time, this institution, once strictly staunch and glowing white, has learned to adapt. 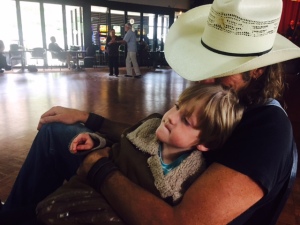 It welcomes everyone and offers the world – smiling faces, cresting sound and an open space in this sickeningly crowded city. It offers respite and respect, alongside a staff that proffer litres of tartare sauce and assistance with your cardi, should you need it.

It is a haven of sight and sound and well-battered flesh, laced in the gentle premise of community spirit, a space to meet, eat, play and dance.

It offers sport for all.

I can remember when they were daggy places inhabited solely by pensioners and alcoholics there for the cheap drinks. Now lawn bowls clubs are the place to be. Take off your shoes and get into some barefoot bowls. It’s the perfect sport for dudes; you can smoke and drink while engaging in “sport.”

*Bronte Bowling Club is not gender specific: both men and women make up the members. The signage was just too good to resist.

**Lawn bowls is generally accepted as Anglo-Celtic, bocce is Italian, boules is French, and there is fierce rivalry between them. Although in times of crisis, anything goes.