On the road again, loaded up on future dreams slick with nostalgia: this sunburned life, grimy with dirt, never looked so good.

The suburbs recede into no-man’s land, a grey sand between urban and bush, the threat of a mall around every corner. Once past the sprawl of fading wealth, the outer rim of the coastal conurbation, its lush green polo-pony-stud-farm badge proudly polished, the land rises sharply, tipping us deep into the interior… which is a vastly different world.

There is a point of no return. It is the point at which you glance up to see an endless sky divested of clouds and soul-searchingly empty. It is stretched taught to the horizon, no room for benign fluffy whites here. This is a place of blistering starkness, with light so sharp it looks as if it could shatter into a thousand shards, where a harsh and unforgiving reality takes no prisoners.

This is bat country…

The Tin Lid is living his little life to the full – it’s one long day of bumping F150-riding laughter, cold pools, hot chips and treasure hunts after another. His first case of pink sun-kissed skin brings on much back-slapping and calls of “You’re a true blue Aussie beaut now mate!” from his proud father and lamenting from his mother. Doesn’t bother him.

Life on the road

He is the reason we dawdle and skitter, his attention span about as good as Mary’s fuel economy (the Cowboy has taken to treating her like a boat and calculating money spent in “hours on the water”), but he is also the reason we stop and look, chase, laugh, tumble and shout. He is the reason we are doing this.

After a day of breakdowns (the great solar story at Muswellbrook: the fuel filter fiasco on the steepest of hills, which caused Mary to hiccup and stall inducing fear in those of us not snoring: and the messy starter motor slaughter in Gunnedah) we find ourselves marooned…

at the Red Chief Motel, Gunnedah, the epitome of 70s kitsch and dubious signage: 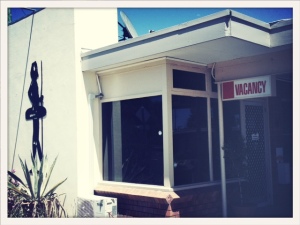 Yes, the phones are self-dial, the TV is colour and the air-con is welcome respite from lazy gusts of 39 degree heat that wrap around your like an ermine shroud. What is not clear is the connection between the Red Chief and the Indigenous man depicted on the side of the pebbledash clutching a woomera. And our thin-lipped Aussie proprietor can elucidate no further. She just points out the pool and offers the Tin Lid free Coco Pops. Beaut.

The forecourt is steeped in late afternoon light by the time our impromptu exile begins. As the Cowboy mutters and curses deep in the bowels of Mary’s engine, the Tin Lid and I play with bits of tar and the splayed offshoots of frayed truck tyres.

All thoughts of a cold beer in the local pub have been summarily placed on hold and the evening descends into a parody of a bad road movie, a dust-streaked family holed up in a tinny motel, lolling in an air-conditioned stupor and faced with ten-to-ten takeaway from the local Chinese, an ill-fated marriage of gristle and monosodiumglutomate.

Gunnedah is streaked with lush green avenues, stately wide-brimmed homes and a healthy looking cricket pitch in the centre of the town. It smacks of a different era, a time of wagons hauled into town, of crinoline-wrapped womenfolk, roustabout-crammed pubs and the Sisters of Mercy.

Grand old pubs stake out the corners of the main street, vying for alpha status, while bush staples – the civic mall, Best and Less, Crazy Charlie’s, the gentlemen’s outfitters and a tired milk bar flogging spiders and day-old sushi – make up the bits in between. 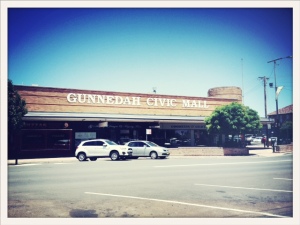 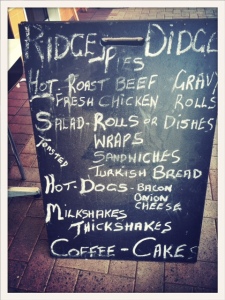 A desiccated once-bloaty toad lays sprawled on the pavement, much to the Tin Lid’s delight, and the butcher takes us on a verbal tour of the agricultural delights of the region as vast rumbling stock trucks surge through the streets, bleating and screeching in protest. 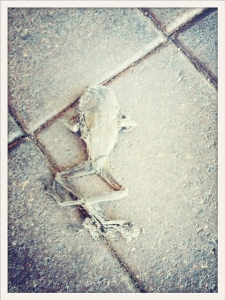 Sporting the moniker Koala Capital there is plenty of emphasis on re-greening prime agricultural land in Gunnedah and the importance of sustaining old growth gums to support the koala population. We went searching but found no ‘walas’, not even in the tallest gums. Instead, we found an eccentric old fella with a model railway in his front yard, intent on teaching us the rules of rugby union. And a giant tomato… 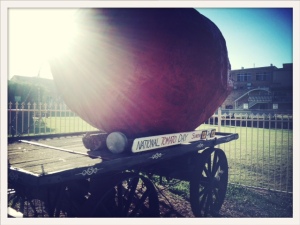 While real estate windows are flocked with For Sale signs, it is clear that there is plenty of business going on here. What is less transparent is the nature of it. A high street window reads: 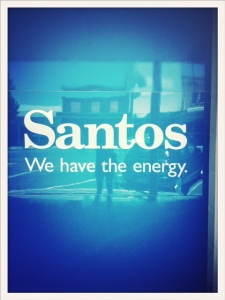 Further inspection yields little information, other than the expensive tag line Unlocking Resources to Fuel the Future. And then there is this, conveniently located in the middle of town:

A quick chat with a bloke in a hat at the pub confirms our suspicions. Gunnedah is home to a coal seam gas program, as well as a number of newly sited coal mines. This leafy old lady, long in the tooth but beautiful still, is frantically redefining herself, a stately maid tarted up in tight clothes and towering heels, a grimace of red on tired lips to draw the crowds.

We pass dusty sale yards and stock pens on the way out of town, Akubra-wearing farmers in tidy rigs roar in and out, and the pubs are filled with ag workers, from roustabouts to cockies to the slaughter man. But it makes you wonder where the other mob are, the mining mob, and how long it will take to change the face of this place irreparably.

On a lighter note this is what happens when the staid world of chartered accountancy steps outside of its box – a Christmas greeting taped in the window that defies the methodical earnestness of counting numbers. Other people’s numbers… 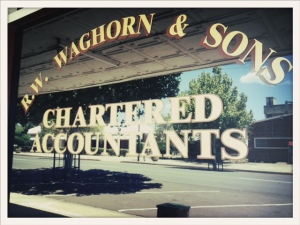 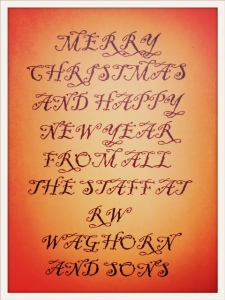 A cursive explosion of happiness

To avoid heat exhaustion during the heatwave, repair to your local bush pub where the atomised water is free…

3 thoughts on “Eat your heart out Kerouac…”