Pounding along a blood-dirt-lined blacktop, swaying to an anonymous beat, the horizon bleeds into the desolate expanse of the interior, a void that inhales your thoughts. I find a well-placed sheep’s skull can help focus the mind, at least on the white lines… 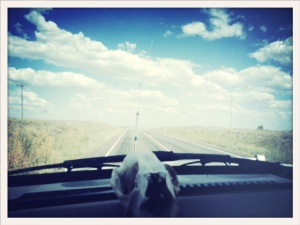 In the midst of this tattered landscape is Muckadilla, a scabby outpost offering cold beer and a story or two. The name comes from the mud (naturally), said to have healing properties and used to treat burns victims during the war. Where once battalions of starch-fronted nurses cared for the injured, today visitors are treated to a crash-course in ocka drawl and this little gem:

Utilised to its full extent, the bench is a precursor to a glorious display of newsworthy stories papering the cracks of the hotel walls, including a grainy shot of a croc eating a shark as it is snatched from the water by a burly fisherman in Karratha; Gordon Ramsey’s ‘fucking omelette’ recipe, a cow-eating wild boar and a sign above the bar that reads: “wanna rage doll?”

Well, yes I do. Thanks for asking.

With Mary parked up beside a demountable behind the pub, the Tin Lid entertained by a concrete kangaroo and the Cowboy lounging against the bar, we get the lowdown.

Described as ‘land you could fatten a crowbar on’ Muckadilla is thriving. The population of this skidmark strip has soared from three to 14 in just four years, courtesy, the publican is sure, of the high standard of the counter meals.

Well, that and mining.

40 odd clicks to the west is Mitchell, deep in the belly of western Queensland’s cattle and sheep farming district. Here the mammoth stock trains pile up, the end of the road for the triples. 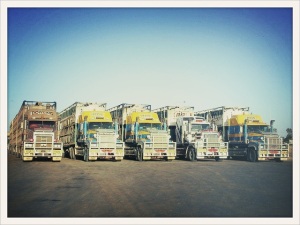 The tail bogies are sidelined, lowing sadly as they are unhooked in the dust and shackled individually for the rest of the drive. Heading east the bitumen flakes and boils, traffic snarling into formation, and at Muckadilla the whump of B doubles invades your bones: the sign says 80 but the locals reckon most slow to 120, eyes pinned. Those that stop – and plenty do – are grizzled and oil-stained. They smell of heavy metal haulage and to a fault are carrying mining equipment…

40 odd clicks to the east, Roma is the freshly squeezed heart of the Central Queensland coal seam gas industry, a ‘hotspot’ that threatens to explode, leaking noxious tendrils of sinister tension.

Muckadilla, propped on the roadside between the two, rides the rip that sucks and gluts between agriculture and mining. It is an inveterate battle of will: farmers vs miners, environmentalists vs resource boomers, the sane vs the fanatic, a modern-day land grab, widely considered unsanctioned yet financially condoned.

This staunch little place capitalises on the war. The pub has always been the stations’ watering hole, there is cheap rent in sawn-up containers parked in the dirt for the mine workers, and let’s not forget the counter meals, which encourage a steady stream of greased truckers and their loads. The pub was once an exotic thing. It’s now functional, practical, air conditioned and well lubricated. 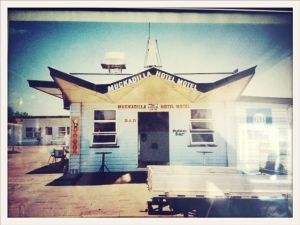 After a night of bellicose ribaldry, stories puddling on a sticky bar beneath exhausted elbows, we weave back to our sleeping hulk which is bathed in the glow of floodlights and well-placed palm trees, just another roadside attraction.

1 thought on “Another Roadside Attraction”