It’s the most easterly point on the Australian mainland, yet Byron Bay has a certain West-side vibe, a gangsta authority over all things karmic and crown-chakra related.

The Bay speaks to people. It is a place etched in lore, a rite of passage and initiation chiselled into the backpacker tracks that span the coastline of Australia, paths worn shiny with overuse and the drag and splatter of banged-up vans.

For this little travelling tribe, Byron was a Mecca – a refuge for the alternative and a haven for the strange. Smoky trails of nag champa and pot streamed from the emerald hills that ring the bay, the Echo ran ads for tofu welders and yoghurt-weaving workshops while straggly dogs tied to trees howled into the night. Fire twirlers lit up the sky with shafts of light and the acrid burn of kero, pubs thronged with bushies, bikers and birds, and bare feet padded hot sand into cooled milk bars. 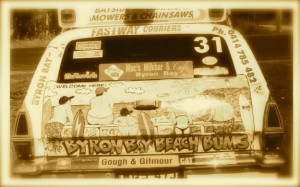 Radical, alternative, flecked with tie-dye and crowned with raggedy dreads stiff with salt, the Bay was a form of scruffy redemption with its off-beat counter-cultured charm, colonics and sticky chai. 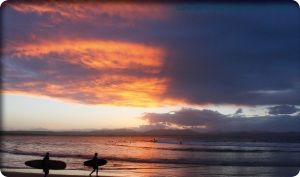 Located in the slumped gut of a long-dead volcano, this lush sea-fringed hinterland is a meeting place, a one-time corroboree site and hunting ground and the magnet that attracts the filings of life. You come, you heal, you leave. Or so they say.

But today we skirt the edge of a new scene, a brander, newer world, glossy with money and power. Muscled 4WDs leaking ice-cold aircon stalk car-parking spaces on the sea front, while the clip clip of spiked heels from those cooled interiors mark a trail to generic shops brandishing tat and tap-and-go convenience. 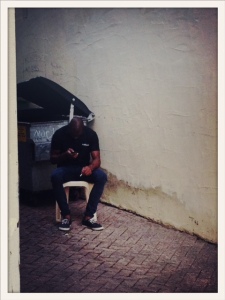 Black Mary causes a stir with her rattly growl, hurling her bulk onto the pavement, prime position on the beach. With the evening wrapping its soft shroud around us we head to the pub for a cold beer. Thumping FM beats throb to a crowd of well-dressed dollies clutching lolly-bright Breezers, who natter of plush rooms in exclusive retreats and the health benefits of kale. We watch from the shadows as shards of laser light clatter through the sweating dark. Glittering eyes follow our movements, curious as to the luggage in the trolley. Emanating from them is patent PC displeasure at the Tin Lid’s presence outside of daylight hours, though he is unperturbed.

Silent censure seems to filter through this once culturally promiscuous town – where once ideals and dreams fucked in the open, now mere suggestion of a life outside the box is best sheathed, while alternative has become a brand.

Like the bloodied aftermath of a bad prom, torn and regurgitated, inappropriate, something to be ashamed of in the morning, Byron struggles with its image. The phalanxes of bashed-up HiAces littering two-minute noodle flavouring and financial despair are easily shunted to the edge of the dream, and increasingly the salacious soul of this one time hipster is sidling west in sympathy, replaced by a plastic fantastic futility.

Market forces have driven out the quirky character of the town, which has long been its drawcard. Salons still offer colonic irrigation as casually as a manicure, but on the main street the offbeat is nowhere to be seen… Byron Bay may have resisted McDonald’s but now you can buy a Subway sandwich, a Domino’s pizza and a Baskin-Robbins ice-cream. “Drunks’ tucker”, as the local police call it, has replaced alfalfa salad. 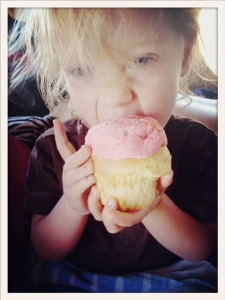 A one-time working-man’s town, with a legacy that includes sand-mining, whaling and a stinking meatworks with a bloodline that spewed offal straight into the bay, Byron has become a playground that resounds with pitched battles, superiority complexes and the squall of entitlement:

There can be few towns in Australia with a more contradictory identity than Byron Bay. On one hand it has, historically, been associated with the alternative lifestyle movement of the 1970s and seen as a kind of interesting hippie retreat in northern NSW. On another level it has been seen as a very upmarket get-away-from-it-all retreat for wealthy southerners not wanting to mix with the hoi polloi who inhabit more vulgar coastal townships like Coolangatta and Tweed Heads. And over the past thirty years it has acquired a reputation as the residence of the rich and famous…

But the early morning beach brings some respite and ripples with life. Surfers share waves with pods of dolphins, backpackers slump, passed out on the sand, and families tag-team in the shallows. Byron is a holiday place and the wafts of Hawaiian Tropic and hot chips that sidle by on a gentle easterly temper misgivings of luxury resorts with million-dollar price tags, street brawls and a shadowy underground that reeks of the old school.

Needless to say, the Tin Lid takes to the idea of a summer holiday with toddler-streaked verve:

And we embrace a week in situ, with Mr Whippys that slip slide down hot skin,

and the company of a baby alpaca, who peruses the Japanese fusion menu from the comfort of her washing basket. 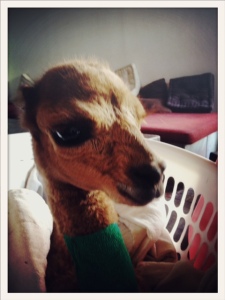 And in this eccentric, eclectic and, these days, exclusive place, we find a peace from the long haul of the open road. The exquisite beauty of the bay is undeniable, a torrid affair of verdant tropical green and violent turquoise, and the sense of the metaphysical is novel. The emphasis on fresh food, alternative therapy and health is a diversion from the Australiana road show, where green veg is hoarded, stashed and eked out until replenished, and salad sandwiches from the servo must suffice.

A hotbed for creativity, the wider area beams with a wholesome originality, a unique vibrancy that allows you to shut out the sense of malignant decay that feeds on itself. Beyond the bay, the cool depths of the interior hold a deep fascination, not least because of the things you overhear:

With thanks to Overheard in Byron Bay

“It’s her housewarming. I’ve already given her an eagle feather but I feel like i should get her something else, too.”

“Hey, you look familiar. Were you in court the other day?”

“I need to get some beef bones for Ganesh”

“I’m very sensitive to the socks I wear – I tend to absorb the spirit of the animal they’ve come from quite strongly.”

“Do I need to bring anything?”
“No… oh – actually, just your favourite cushion. And some cacao.”

“I’m a private person. I don’t put my smoothies on Instagram.”

“Got much work on at the moment?”
“No, I’m really just focusing on getting yarn-bombing up and running in Lismore.”

“What do you do?”
“I’m a mystic. I also work in construction. Everyone needs a disguise.”

“Do you mind if I keep these aioli containers?”
“Sure, why?”
“I’m sleeping in a cave tomorrow night with seven men and I’ll use them for candles.”

“I only use organic moisturiser – it seals your aura better.”

“Well you could go and work in Brisbane, but you’d have to wear shoes.”

“It’s very damp in here – have you been tribal belly dancing?”

“I’m not answering to ‘Avocado’ since I started eating meat again…”
“How did you put your back out?
I fell asleep on my crystal…” 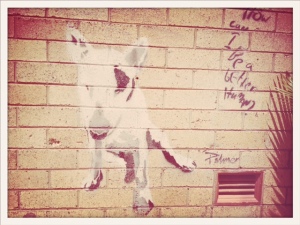 8 thoughts on “Eat, drink and leave”