In an effort to maintain my frenetic search for Australiana, and in a fit of wild-eyed idealism, I packed the Tin Lid and the Cowboy into the Holden and pointed her nose to Soviet wastes of Homebush and the Royal Easter Show.

What better environment to bear witness to the deranged mania of our cultural psyche than an oversized paddock swarming with small humans high on sugar and roaring with adrenalin, mobs of cattle lowing with good health, outlaw clowns, balls of fluff that careen into ankles with squeaking abandon, roustabouts clutching half-crushed cans of brew and harried parents with fairy floss smeared across their peripheral vision? 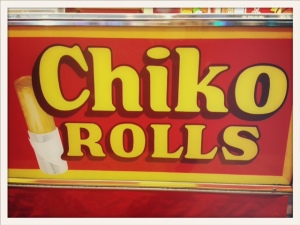 This raging maelstrom is the crucible of Australiana: a small child coos lovingly at a helium-filled bunny snared to her wrist; an old bushie adjusts his hat to better see the young stags riding stallions in the rodeo; working dogs yip and holler, tucking sheep into corners as neatly as cobwebs. A stock whip cracks the air like a rifle, quivering knees or hearts depending on your view, and a sheep-handler sings a Kylie song out of key.

Here Chiko rolls and Dagwood dogs parry for supremacy, the doughnut stand puffs cinnamon into the air to attract its prey and pizza comes in cones. Here apples are juiced in front of you, offering a tart taste of the highlands, slabs of meat roast in the open and you get to have a beer with Duncan…

The stark truth though is it is the cheese-on-a-stick stall that they queue for, lines snaking with sinuous indecency. A small sign in each booth reads; Hold on to Hope, a gentle message for those struggling with life. It’s a curious marriage, cheese-on-a-stick and hope. Perhaps the message is reassurance that if you can get cheese to stick on a stick anything is possible. 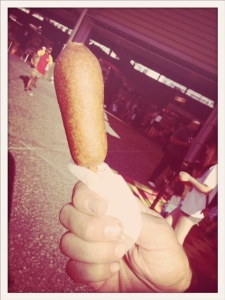 Here ugg boots mate with flannelette in broad daylight and merry-go-rounds have heritage orders. Sensible shoes carry middle-aged knitters to the wool display passing Kermit and Miss Piggy, who hang suspended from their feet and, though clearly indisposed and eager to clamber down, are impossible to win.

The wooden monkey racetrack tests the Cowboy’s prowess and his dismal failure does not go unnoticed, however a rapid retreat into the arms of a horse named Stan lessens the blow:

Beneath a big-wheel shadow too small for its owner we find what we have come for, a barn that smells of the crush of fresh straw and the acrid smell of urine. It is fat with infants – human, poultry, bovine, ovine and swine – and life burgeons from the seams like jam from a well-held sandwich.

Obeying strict stroller parking instructions we duck to enter, and the Tin Lid hurls himself  in the teeming melee – he has found his mob… 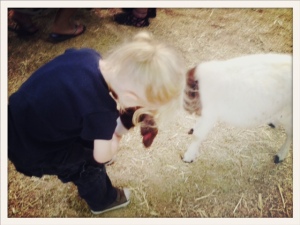 The public order riot squad lingers outside twiddling its thumbs, anxious to quell expected carnage. The bawking, squawking, bleating oink of the animal sheds does little to rearrange stultified expressions of derision, though a lone oik attracts attention, low-slung dacks and a tattoo of a Chinese symbol on his upper arm (which may or may not read #66 chicken chow mein) a dead giveaway of his criminal intent.

In the dairy shed a bored ringer cruises Facebook, a beer at his feet, his stock oblivious to his distraction;

While in the poultry shed the art section cuddles up close to the Pigeon Fanciers Association. This little gem says it all really:

In a quiet corner there is evidence of fowl play – a paper plate despoiled by sauce and sticky fingerprints, tiny bones littering the straw bale next to it, serve to remind of the tenuous nature of this show and tell…

The Country Women’s Association beckons. A nice sit down and a cuppa is the ticket, before a stroll through the cake decorating pavilion, a shrine to iced invention and the dark arts. 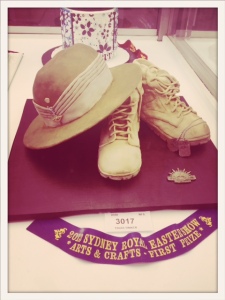 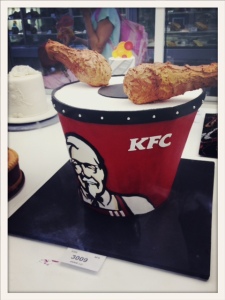 The necessary deliverance from this atavistic alchemy comes in the form of cold beer and a leather-carcassed biker slouched against a temporary bar discussing the drought out west with a mob of weathered stockmen, weary after a week in the city.

And as the sun melts from the sky smearing gold and crimson across the horizon the show comes into its own. The fading light sparks a flurry of fluorescence, neon flares stab and fizz and a cast of carnies loom from the darkened reaches of churning machines.

Rides emit a shrill pitch, lights flash and sparkle and the tension mounts, an amplified unease that heralds the birth of night.

Sideshow alley is the Apocalypse Now in this twisted grimace of entertainment, where life bellows in angry rebellion, strobe-lit in hot pink and lurid green. It is a giant step from fluffy bunnies to this greased oblivion, but the Tin Lid takes the steep learning curve in his stride, howling back his appreciation, slicing the air with a whirling blur of light that shrieks the opening chords to Waltzing Matilda.

It is the revelry of fools, a poisoned spurt of excess gilded by feel-good fantasy, yet I cannot wipe the grin from my face and the boys know no limits, cramming hot chips slathered in chicken salt into mouths sluiced with saliva.

This is the home of the brave, an unmanned crossroads deep in the heart of Australiana.

4 thoughts on “Home of the brave”