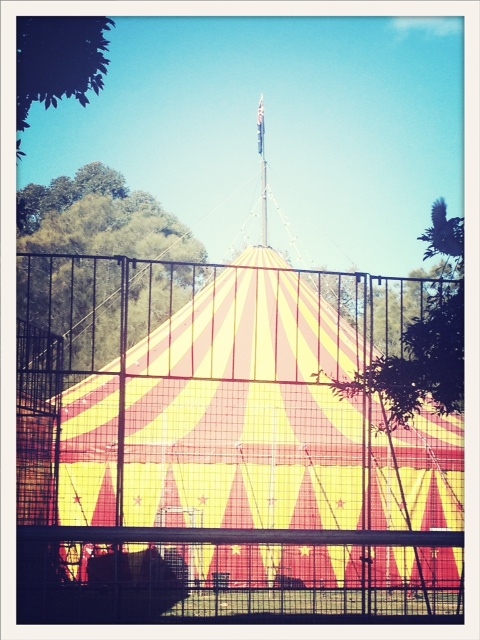 Marian is 78. The Tin Lid and I met her one morning as we were gazing at the lions that prowled and paced along their hurricane-fenced bit of pavement on a grimy stretch of the Princes Highway in that bit next to Tempe that has no name.

Proud, eclectic and dripping with the irreverence of a life less ordinary, the circus has come to town, set to run away with my imagination. The Big Top, resplendent in stripes, flies the Southern Cross while a tidy paddock is cordoned off as home, trailers and trucks bivouacking the perimeter.

This is Stardust, one of Australia’s last travelling animal circuses, a mongrel tribe of wanderers and their money-makers – ponies, peacocks, monkeys, big cats and sometimes llamas, when they feel like it.

Marian is quick to dish the dirt. She is the circus school teacher and responsible for a mob of yowling tin lids (and their education) when they are not learning how to ride a bare-back pony on one leg wearing a star-encrusted leotard and crimson lipstick, or drive a clown car with size 22 shoes…

This family-run affair is a curious hybrid. With all the hallmarks of scandal and intrigue, Stardust is the illegitimate offspring of two great circus families, the Lennons and the Wests. 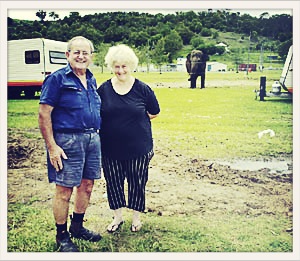 When Lindsay Lennon married Jan West in 1989 they united their 11 offspring from two separate performing families and created Stardust. Beneath a clinging miasma of divorce and ‘lost persons’, two families became three… Five of the original West children and their families still perform with the circus while the others remain at Lennon Bros Circus and Webers Circus. 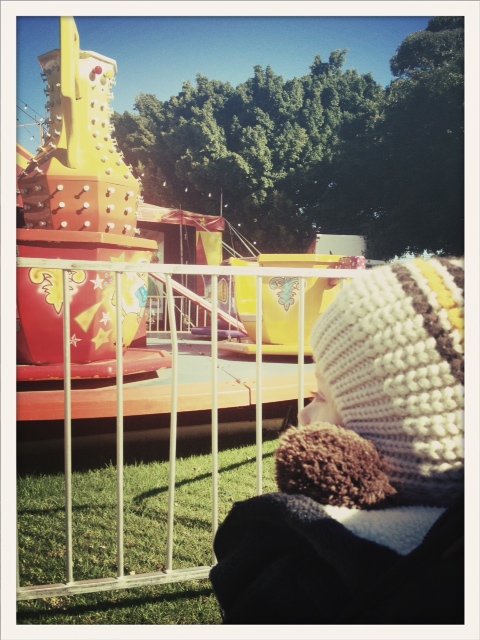 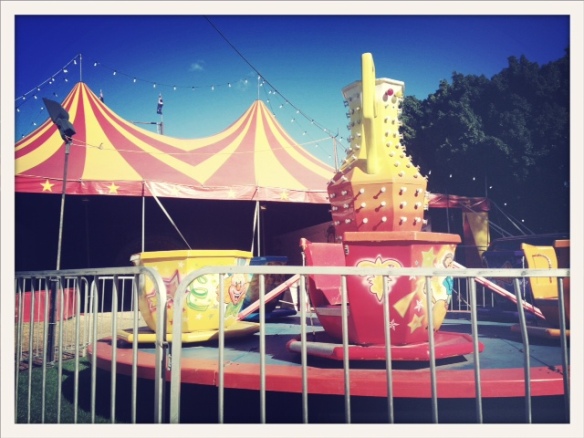 While the Tin Lid trips out on the teacups I am afforded the chance to dig around in the dirty daks of a notoriously tight-lipped mob. As we are talking, faces appear from trailers, the ‘nine-week-old one’ howls in indignation and ‘one of ’em Wests’ pops out for a gander.

It feels a little like jabbing Tony Soprano with a sharpened calzone… dangerous. It is a glimpse into a carnie life, the romantic idealism of a traveller’s journey grating hard against diesel-fumed mechanical beasts, the grind of flashing neon, the acrid primordial stench of wild animals and the lingering grease of stale popcorn.

On a wild, wintry day a lifetime later, we return, with longer legs and refreshed headgear. A year on and there is no sign of Marian. The “nine-month-old-one” is dangling from a fuel pump and scoffing fairy floss and the circus is harried by the elements, hunkered down, its glitter slipping a little. 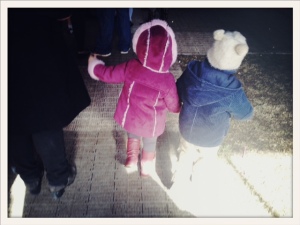 Wide-eyed rugged-up tin lids are oblivious to the cold and the dire warnings of clown-assisted ejection for the use of ANY CAMERAS ANYWHERE in the Big Top.

The greyer among us sidle past carnies in hot-rock-pockmarked fleece,  iPhones smuggled beneath layers, trying to restrain the primordial surge of children under the influence of  sugar…

Frogmarched past tatty neon signs – that promise Photos with our lion cubs, just $40! Complete with souvenir Stardust frame! and conjure spangled memories of the 80s while re-igniting my inordinate fear of clowns – the Tin Lid curls himself into my silhouette, a bunny caught in the lights. Our seats clang as we sit and the air is streaked with greasepaint and nerves and the sound system bellows that classic “Showtime!” carnival music.

The moon-faced ringmaster is a smear of sequins wearing a sheen of bourbon and a glinting diamond ear-stud. He morphs in and out of spangle-frosted outfits, a dazzling array of gaudy gauzy bling, his grin skids the edges of leering and he emits the tarnished gold of shattered dreams.

But the show must go on…

Full-grown lions pad across the sawdust to an eerie echo of ‘oohs’. These majestic creatures inspire awe and revulsion and force a jagged debate about animal cruelty, protestors out the front in wild-animal onesies quick to denounce the circus and its ways. This is no open veldt, but to these eyes the lions seems utterly unfazed by the man in red, and do his bidding in their own sweet time in the knowledge they will be rewarded.

Burly men in blacks double as security and stagehands and keep a healthy distance from the big cats. Once back in the paddock, the rickety cages are ripped down and more than a few of the men head backstage to slip into something more comfortable. Like spandex…

This is undoubtedly family affair with a good degree of moonlighting. From toddlers to pensioners, all are involved and at the interval it is clear why. The circus inhales workers like a two-pack a day smoker inhales tobacco – with a wheezing dedication. The gravelly-voiced black-clad roadie in his 60s who serves me margarine-slathered popcorn later appears as the trapeze catcher, decked out in a lycra leotard split to the navel. The chick with the door list sports glitter-encrusted lids and dangly earrings that belie her night job and a clown is serving coffee, makeup intact. 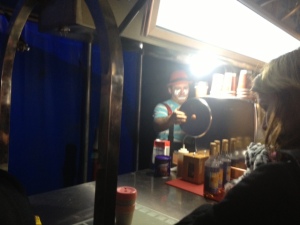 Sisters, cousins, fathers, sons and lovers, with a grandparent or two thrown in for good measure, Stardust is entirely self-sufficient. From aerialists to monkey trainers, diesel mechanics to fluffy-toy sellers, no outsiders are required.

Father and son acrobats come complete with regulation pointy toes and are adept at the old throw an orange in the air and spear it on a spike on your chin routine. Lascivious clowns entertain with overly expressive groin movements and Orwellian pigs are obligingly human. A shetland pony sculls a bottle of goon while perched on an armchair and pretty ladies clad in the best stripper gear money can buy gyrate to the strains of I’m a good girl… 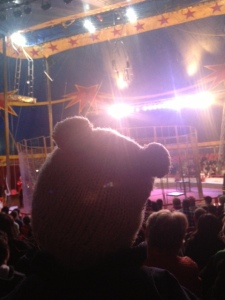 The Tin Lid has uncurled himself and is spellbound.

Before trying his hand at a little balancing action… 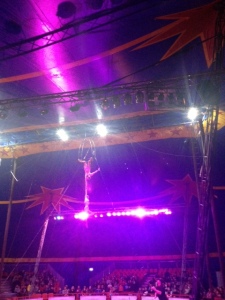 The performances have a simplicity to them that is endearing, a ‘time-gone-by’ relapse that is as feelgood as a random episode of Kingswood Country. As the sound crescendos we are remind that “if it’s too loud, yer too old”, before the stars of the show are introduced, a litany of Shae, Shania, Shakira and Mephis, Roxanne, Wonona, Wonita, Dakota, Cassius, Kevin, the seven-year-old plant, and a pony called Shazaam.

The finale features a trapeeze net that unfurls to the highest reaches of the Big Top. It is a thing of ethereal beauty, made from entirely natural fibres and slung low and heavy. It looks out of place in this unnatural world, but as neon forms flip and turn in the air above it, grazing bellies on the canvas roof, the net comes into its own. 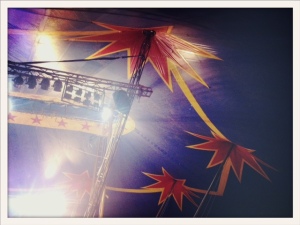 This a disparate extended family that exists for each other. Of her children’s decision to stay with the circus, matriarch Jan has been quoted as saying:

“I’ve not forced any of them to stay, not that you could even if you wanted to, but they’ve all chosen this life, and they all work hard and take the bad with the good.”

A different breed, they have been bred to populate Stardust and, like the animals they perform with, their lives are entangled in the lore of the road, in the star-spangled roar of the show and the closest-knit bonds of a very family affair.

Is it rude to ask what flavour?

3 thoughts on “The Greatest Show on Earth”