When the Tin Lid was tiny we would walk the boundaries of our world together, just me, him and his bawling insistence at life.

Number 22 Hillcrest Street would sometimes still his wailing. His scrunched-up eyelids would unfurl to reveal baby blues that gazed at the decaying gates that barely contained a jungly fervour. Whatever it was that stilled his fury I will never know, but perhaps it was the ghost of a nine-year-old girl whose name was Anne.

The daughter of Richard Way, who built Lymerston House as a family home in 1842/43, her memory is conserved in a window of the Anglican church at St Peters and still shines brightly on a cloudless day, a fitting memorial to a child of the light.

I don’t know how she died and I haven’t seen the window, but when I venture in to number 22 on an afternoon bearing shards of violent light from the belly of bruised clouds, something shifts curiously in the dusty innards of a once grand home. 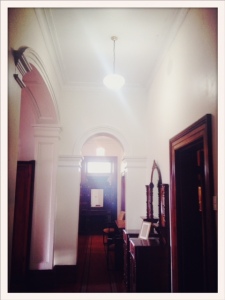 It’s a clearance auction, no reserves, no buyer’s premium, a lot sale flecked with post-it notes. And I am not alone despite a singular lack of other viewers.

There is a stirring, an implacable sense of something else, a restless energy that whorls around me in curious curls of ether and sparkling light. It is at odds with the dour consecration that weighs heavily on the building; of the eight bedrooms, four bathrooms, large kitchen, formal dining room, anterooms and more, the star of the show is the inner chapel, which gives the property its bulbous Anglican nose and crystalline showers of light.

Moribund velvet sags over furniture from the yard sale of life, representative of every era and redolent of guest house giveaways. Scratchy lace curtains twitch nosily at the outside world, rubbing up against etched glass and flaking paint complete with sticky fingerprints. It doesn’t take much to imagine the curious eyes that peered from here… 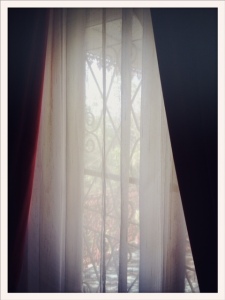 A woman sidles up to me as I am clocking the world below:

“They used to call out ‘proddy dogs!’ to us whenever we walked past”,

she whispers. Who? I enquire…

“Them bloody tykes, that’s who. Never did like ’em. Used to stand right where you’re standing and shout out the window at us in our school uniforms till the nuns dragged ’em away, scolding ’em at the top of their voices, screeching really.”

Utterly confused, I ask the proddy dog if she will elaborate. It turns out after Richard Way died in 1872, the staunchly Anglican Lymerston House was acquired first by the government to house rail workers as the rail line was built, and then by the Sisters of Mercy, a catholic order that is defined by its enduring allegiance to Catherine McAuley, the first merciful sister.

And God no doubt.

They also ran the convent as a catholic school while Tempe High was being built. 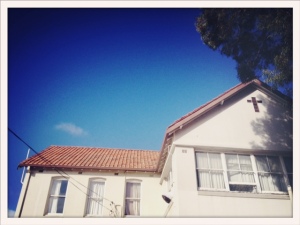 No less confused, I wander off to unravel the tangled thread of history that weaves its way through this sighing place. Being secular in nature I am not sure if the iconography I see is of one team or the others:

And some is perhaps of a more domestic ilk:

Needless to say, it is not the trappings of tortured/ saved souls that intrigues me but the light that shafts through the space like a rapier, dancing and vibrating with glee. 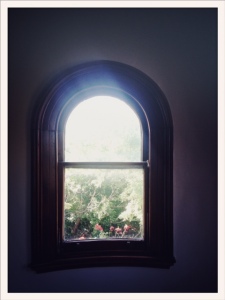 It is a dream-like phantasmagoria of ephemeral form, flitting and quivering around my every movement. It adds a warmth and humour to the stern austerity that resides here still, as if giggling at the premise that the house could be anything but a playground for a child. 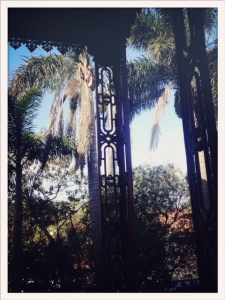 In 1982 Lymerston House was purchased again and reborn as the Kriskindl Residential Education Centre and Guest House. There is no information as to the teachings of the residential education centre but the reviews of the guest house are illuminating:

“There were notices everywhere warning guests that infringement of rules would necessitate a fine. Warning signs were also posted to the effect that residents in various rooms were on night shift and guests were to be quiet. It was then we realised that this was not a guest house in our understanding but a hostel which housed permanent guests as well as taking in the budget traveller. The permanent guests were a dour lot and obviously did not take kindly to the temporary guests.”

“I called the owner and picked me up on time and warmly welcomed me. The difference, he is a good christian. I like the environment, affordable for those that can not afford luxury. Basics provided.”http://www.tripadvisor.com.au/

Described variously as ‘bleak’, ‘honest’, ‘unrelenting’ and ‘frankly terrifying’, Kriskindl did little to live up to its Secret Santa moniker, though I suspect there was hidden meaning in its religious symbology. It certainly explains the untethered furniture, shuffling off its mortal coil one spring at a time, and darkened corners crammed with hoover parts and plastic cups.

But nothing explains the ghostly presence that is following me cheerfully. My mind tells me it is a trick of the light but deep within me I recognise the soul of a child who playfully tugs at my conscience. 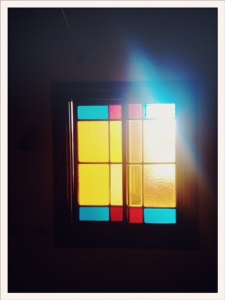 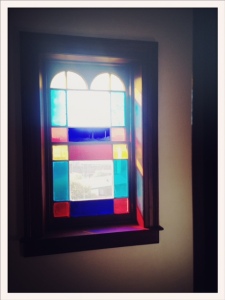 An Anglican home converted into a convent before housing the weary beneath the moniker of Christ’s child (Chriskind is the German for Christ-child and the likely origin of Kriskindl), Lymerston House has played many parts, but my money’s on the playground for a little girl whose life was cut short but whose spirit plays on. 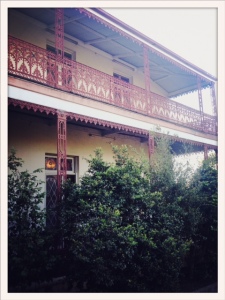 See you around Anne Way.