Australia’s only tropical capital,  Darwin gazes out confidently across the Timor Sea. It’s closer to Bali than Bondi, and many from the southern states still see it as some frontier outpost… But Darwin is a surprisingly affluent, cosmopolitan, youthful and multicultural city, thanks in part to an economic boom fuelled by the mining industry and tourism. It’s a city on the move but there’s a small-town feel and a laconic, relaxed vibe that fits easily with the tropical climate.

The last time I was in Darwin it was 1998. My world was aflame with anarchy, and I spent my time stomping solidarity into the dirt at Jabiluka, in protest against the threat of a sister uranium mine for Ranger. The wetlands of Kakadu, to the east of Darwin, and the Mirarr people whose land it is, face an ongoing battle with the deadly removal of yellowcake, though there are significantly fewer protest buses to help these days… 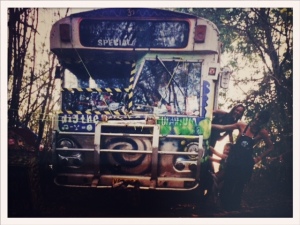 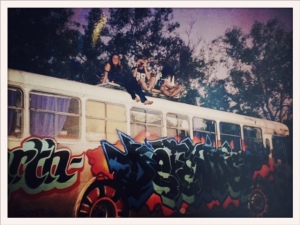 In town, our days were spent parked up beneath the shade of the pepper trees on the Esplanade, toes curled into still-damp buffalo grass, brewing up tea in the billy, lounging, laughing and alive with the heady fervour of our campaign. At night, catching stars in longnecks, we would sleep on the grass until the rangers’ devious 5am sprinkler plot to move us on forced a retreat to the back of the Falcon.

It didn’t matter that you couldn’t swim in the ocean; the seedy yet strangely exotic confines of the Hotel Darwin, a colonial dear who struggled with her hearing, brimmed with salt water and draught beer, potted palms giddy sentries that lolled against time-worn walls. Her crackly pool cradled hot bodies flush with Thursday’s dole cheque, and her patina was flecked with hiccuping shadows as the sun fell into the sea. 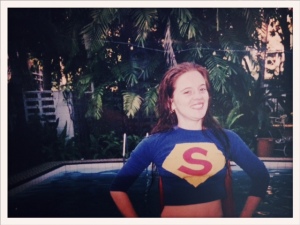 Or we would drive out to the cool green waters of Howard Springs, a red-dirt slash deep in the jungle 35kms south of the city, and sink into a waterhole teeming with barramundi the size of small crocs that would brush up against our pimpled skin with lascivious delight.

Now? Like a sullen teen in a skin-tight dress and heels too high, Darwin is all show and no substance, her flesh exposed yet promising nothing. The Esplanade is off limits, save for a bikers’ meeting fringed with TRG (Territory Response Group, a tactical police division with a reputation that snarls). Howard Springs is barred to swimmers, a tacky playground for the kids where the fish look mournfully up sensible skirts. And the city skyline is cleaved in two by towering cranes that vibrate with the angry buzz of machinery from below. 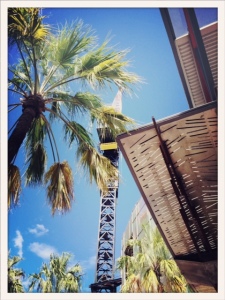 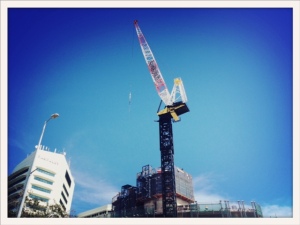 Darwin has its toes in the saltwater and its ears in the dirt. The nuances of its character have been forged by the tough-as-guts mentality of a people who thrive in this remote outback space, surrounded by water too dangerous to take a dip in, survivors of Japanese air raids during World War II and a cyclone that levelled the town in 1974 (Tracy, you bitch). They have a reputation for stoic understatement; “yip, it was blowy…”

But the muscly brawls and stubbied banter I remember has been replaced. The Hotel Darwin was the victim of concrete cancer they say, though in a curious coincidence the demolition crew came in just 24 hours before the heritage order was slapped on her creaking frame, razing her to the ground to make way for a tourist village, which is, at its best, oxymoronic.

And the seditious lawlessness that holds hands so coyly with frontier towns the world over seems to have been cold shouldered, dropped in favour of cosmopolitan gated living and frozen yoghurt. 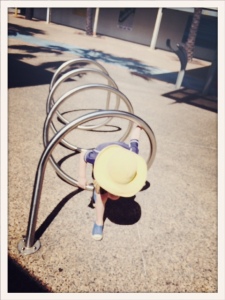 There is art beneath the cranes, and there are glimpses of the glory that is the tropics: 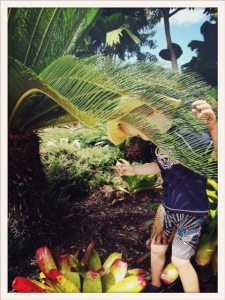 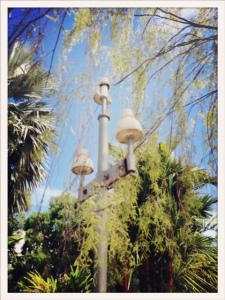 There is tasty looking wildlife: 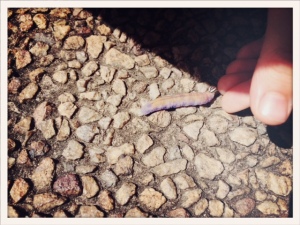 But this brash young thing is all about the glitz and the glamour of her newest attractions, from the neon holler of the waterfront precinct – STEP RIGHT UP FOLKS, PLENTY TO SEE HERE! HURL YOURSELF INTO THE TREATED WATER! NO NASTIES! YES! WE HAVE FROZEN YOGHURT! AND A WAVE POOL! AND BANDY-LEGGED SECURITY WHO WILL ENSURE YOU ARE CONTAINED AND SOBER AT ALL TIMES! WHAT COULD BE BETTER? – with its metallic sand and murky depths, plastic tat and high-rise prices, 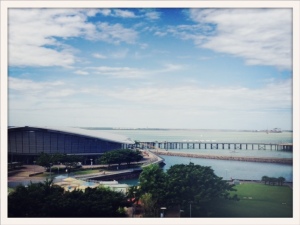 To her overly expressive signage, for those with little imagination I assume. 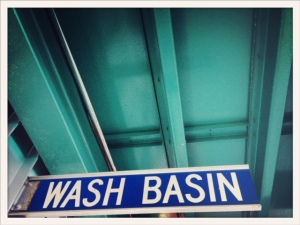 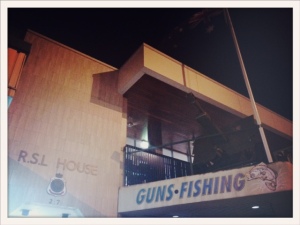 And on a night out on the tiles the Cowboy and I glean more about Darwin’s botched facelift. A fella who does hair and his pretty Indo girl (fabulous hair) talk of excess, of salons across the Territory, Asian brides, fast lives and digging up Bagot Road just to use up the cash that is splashed around by the government.

Sipping genteelly from a fishbowl of lurid liquor, Damon explains that the Territory belongs to Canberra. It is wholly owned. So there’s little chance of a recession here, propped up as it is by the government, the military, tourism and mining. That also means no self-governance, but who needs that when there are rickshaws peddled by long-legged scantily-clad backpackers and late licenses and an armada of tacky hotels that breach the Esplanade like a badly steered invading fleet?

And really, who doesn’t like a gas mine off the coast, what with its dutiful employment record and killer profits?

At least Mindil Beach hasn’t changed much, with its smoky tang and bubbling lilt, the heady brew of a cosmopolitan society who still throng to watch the sunset over Fannie Bay: 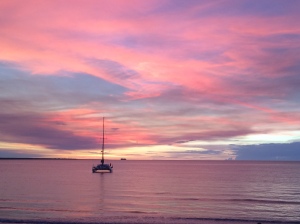 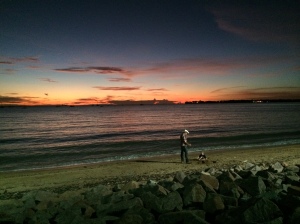 And the sprinklers still work:

There are moments that are ripe with the past – the girl with bi-polar and a sad story shares her chips beneath the whine of Baby Don’t Hurt Me; squaddies bail up a ringer in for a big one and shout him a night on the piss; Jesse, curled into a ball, sleeps beneath his ute, the healer in the back on guard; and an old fella invites us to go crabbing at Lee Point, “but mek sure youse brings plastic feet eh? Der’s crocs up der” – but mostly the city is concrete and steel, sapped of memory, its faded glory lost to the shadows cast by progress. 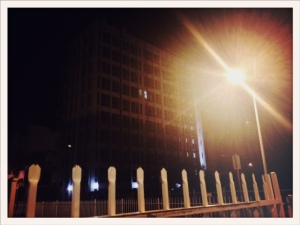 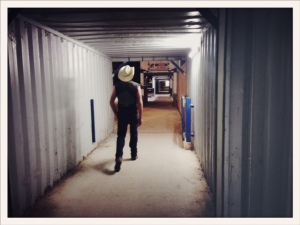 Heading inland, away from this flirtatious fringe with its skyscrapers and sun loungers, the sky reveals a ancient horizon. I can’t help but think that Darwin, with her blowsy revamp and hefty shopping allowance, has turned into a spoilt little rich girl, pearls dripping from freshly shot ears and diamonds on the souls of her shoes where once bare feet and a broad smile sufficed. More is the pity.

The road out of town