One of the worst kept secrets in Sydney, Wendy Whiteley’s secret garden is mesmerising. It is a place invested with emotion, joy tinged with grief, peace rippling with agitation, and introspection duelling with extroversion.

It is a remembrance space, where memories swirl and glisten, tears that roll tenderly across the garden’s skin, an unearthly realm wholly of the earth and its fecund beauty. 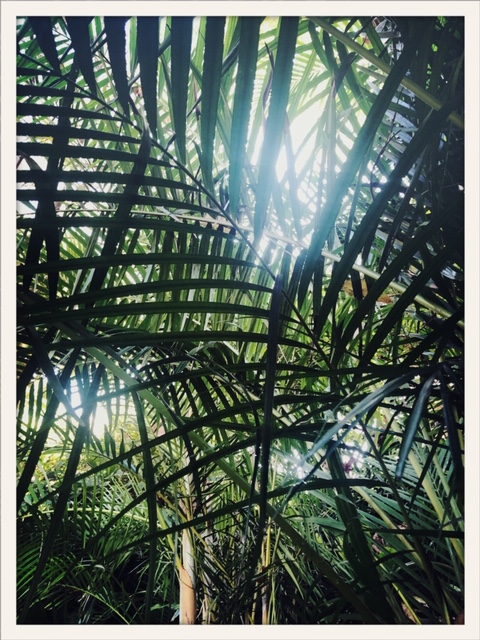 Autumn carousels at the edges, adorned in gold. The light filtering through is inlaid with iridescence, a sharp glint of dew prickles the retina, and the smell is gothically pungent, a damp stew of rich earth, rotting bodies and the skeletons of leaves.

For over 20 years, Wendy Whitely has toiled here, divesting her grief into a florescence of love. Neglected and forlorn during the years she and husband Brett Whiteley lived in Lavender Bay, the garden was ripped, torn, trampled and scoured into existence following his death…

“In the weeks that followed Brett’s death in 1992, Wendy’s grief-stricken need to regain some control in her life, to clean up a mess that she could clean up, found her obsessively attacking the piles of overgrown rubbish on the large land-filled valley of unused railway land at the foot of her house. Wendy hurled herself into the site, hacking away at lantana, blackberry vines and privet, clearing up dumped bottles, rusty refrigerators, rotting mattresses, labouring till she was too exhausted to think or feel, then collapsing into sleep each night.”

She has created a sanctuary, a healing place still raw with sorry business yet innately peaceful. Perhaps that is why people are so attracted to it, for while the foliage is exquisite, the shrubs bushy and the tall trees sentinel in their guard, there is something else here, a sense of cathartic release, a sense of pure peace. 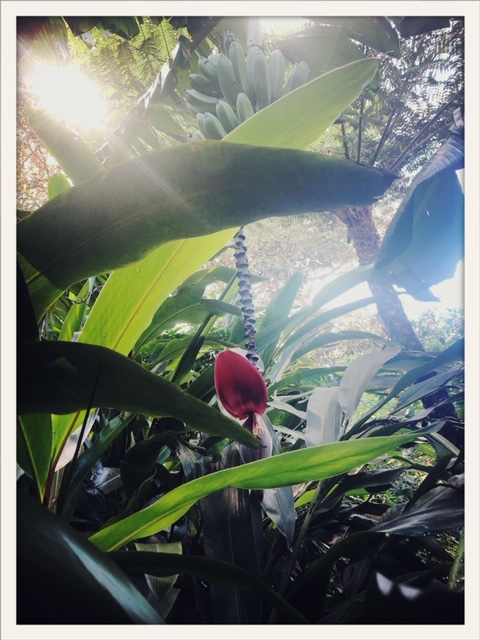 I didn’t realise it at the time, but I suspect subconsciously it’s why I invited The Gamekeeper…

Who is quite beside herself.

She is communing with nature, a fleshy native among exotic orientals and indigenous stalwarts, a panoply of lush vegetation: Port Jackson figs, bamboo stands, camphor laurels, Bangalow Palms, a Moreton Bay fig that seems to swells perceptibly each time you gaze at it… native ginger, Acacia, bananas, bromeliads, ferns, vine-strung masts that carry a canopy of green, and Dr Seuss trees…

Winding gullies peel from Wendy’s elegant home at road level, scuttling fast and steep into the depths. Carved wooden handrails are a serpentine guide to bark-lined paths, the garden absorbing you as light is extinguished by dark. In the dampness near the water’s edge, a wagtail flits impatiently, its legacy as a harbinger of gossip and bad news distilled, here, into vague disquiet. 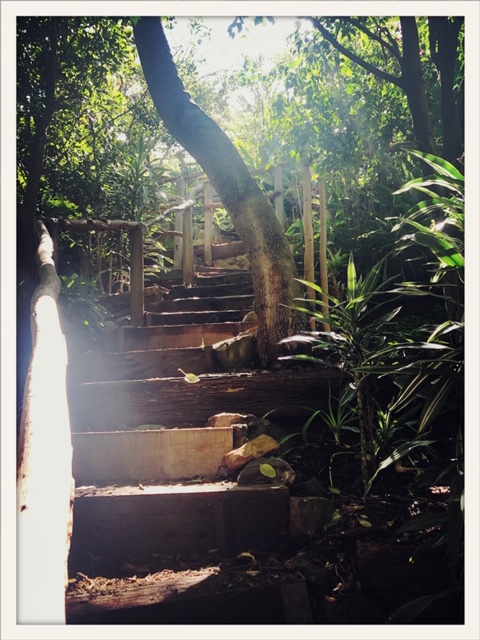 The bird’s flitting message is poignantly clear, though. This is goodbye, the separation of a long-limbed friendship by distance. The Gamekeeper is relocating, escaping the emerald city for greener pastures.
With change comes melancholy – rakishly astride anticipation – and mourning for what will be lost. But in this sacred space, invested as it is with spirit and soul (and the ashes of Brett and their daughter, Arkie), I sense the joy in change, the possibility and expectation of what comes next.
Rubbled with white goods, tangled, feral in form and choked by lantana, the garden was cultivated into what it is by grief, yet at its heart, what it conveys is hope and refuge, which is what every traveller needs.
That and a hip flask…

“Why do you go away? So that you can come back. So that you can see the place you came from with new eyes and extra colours. And the people there see you differently, too. Coming back to where you started is not the same as never leaving.”

Forever in debt to the rapacious canine demands of The Kelpie, the newest member of the mob, I find myself in the weedy gutters of anonymous backstreets being tugged towards the park – any park. With noses snuffling, ears twitching and eyes bright with the expectation of rotting treasure, she and I explore our daily date with dedication…

On a lip of land that juts above a sulky river was once a castellated Victorian Gothic mansion, a queen sporting a regal demeanour over her 130-acre domain. The Warren, so called for the tumbling colonies of rabbits bred on the estate to be hunted, was home to wool merchant and politician Thomas Holt in 1864; a prestigiously leafy estate overlooking the Cooks River, she wore her grandeur as freshly-combed ermine. 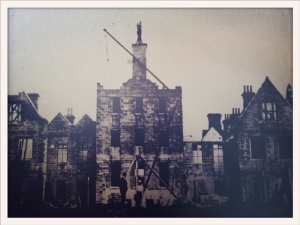 Thirty bedrooms, a dining room to seat 50, art gallery, bathing sheds and Turkish baths, and located in the heart of riverside Marrickville, The Warren was a real-estate’s wet dream. Today, little remains, though there is a distinct sense of propriety, of sweeping capes and walking canes, of parasols and rum at dusk, as the bats flit silently by.

The Warren may be long gone, but it still exerts a powerful fascination. Residents, both old and new, often refer to their locality as The Warren, and its presence can be sensed in many ways.

Ferncourt School is built from the stone of The Warren’s demolished stables. On the banks of Cooks River, hidden behind concrete, are the remains of The Warren’s burial vaults, and a large amount of sandstone… has been recycled into retaining walls and kerbs and gutters throughout the suburb.

Two towers, originally piers from the back of the building, stand sentinel on Richardson’s Lookout in Holt’s Crescent in South Marrickville, a spindly curve of street that follows the swell of the river. Cobblestones rumble beneath ancient figs, a memory of a driveway perhaps, and the ghosts of garden paths linger, lined with sandstone flags worn soft with time. 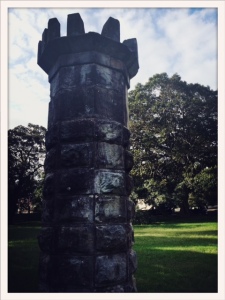 Gazing into the distance you can imagine languid lunches on the lawns, the clip of a sulky bearing well-dressed guests and the breezy air of entitlement.

And while the castle was demolished in 1919 (after hosting an order of Carmelite nuns and an artillery training camp during the First World War), the estate remains closely guarded by its feudal community. Despite the glaring absence of the original mansion, a hollow lost to time, the glory of Holt’s domain is steeped in a run of ageing river queens moored to the sludgy banks of the Cooks River. 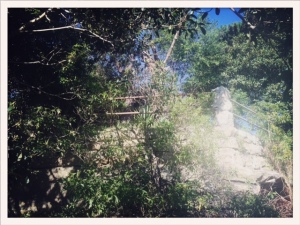 With their toes in the damp, mottled faces staring resolutely uphill, the grand dames of Thornley Street would once have been landscaped gardens. In a later incarnations, they were the boom-time beauties, Edwardian weatherboarders and Californian bungalows of the late 1800s, turn of the century and ’20s respectively, sought after seclusion perched high above the banks. 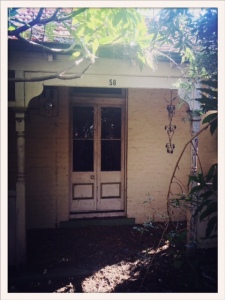 These landlubbers have time sequestered in their dappled flanks, weary memories surging like tidemarks in the rising damp. Paint peels like sunburnt skin, raw patches peeking out from beneath, fly-screened verandahs scratch in the heat, and pastel fibro fades in the glare.

Their captains are invariably polite yet reserved, wary of too much attention. Lola and Luigi, deep in conversation over the fly spray, are happy to pose for a shot, asking; “why you want love? You like us old peoples?” Well, yes. I do. What with your stories and insight, life mapped on your faces like sea charts speckled with salt. Further along, an old fella caresses the tarp tied taut around his late ’80s Mazda; “Got a few of ’em love, great motors. Bloke next door hates ’em, says they is an eyesore. But his whole place is a bit on the nose if y’ask me…” 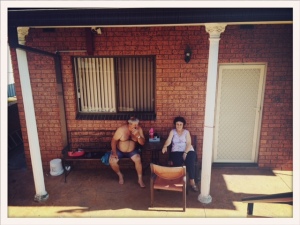 The bush thrives here, in this slice of suburbia; the river breeds it in swathes along her banks; mangrove roots thick with mud, sandstone cliffs that create shadows of cool, banksia, acacia and mulga ferns, speargrass, she oaks and prickly-leaved paperbarks that line walkways yipping with dogs on leads and kids wobbly on their wheels. 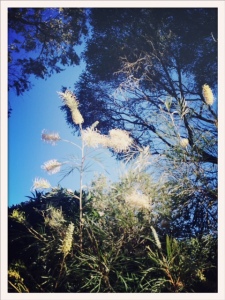 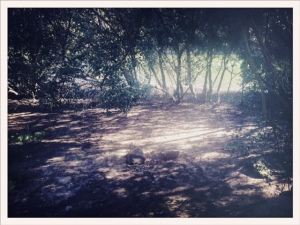 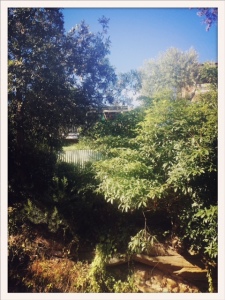 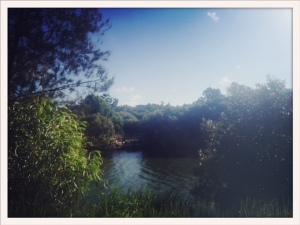 Between the faded faces and gentrified glitz of Thornley Street are cool diving driveways that strip down to the water hundreds of metres below, asbestos afterthoughts – home to tarped cars and garden tools – clinging to them like carbuncles. 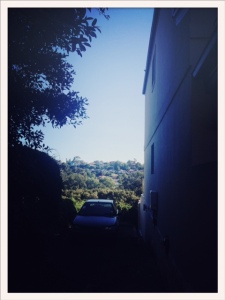 It is like looking down an old woman’s gullet, a vaudeville trick that vilifies. Beyond the tidy-town streetscape, straggly ends trail to crippled Colourbond fences that lounge near the water’s muddy flanks, bereft of bilges. Flood marks are a permanent stain, and veggie patches are overrun with natives. 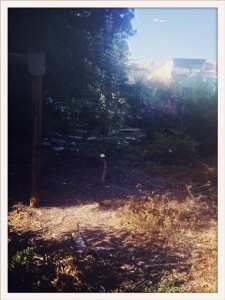 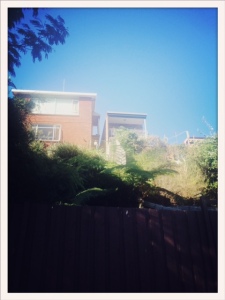 Like decaying paddleboats hauled high on their hitches, the river queens slump slowly into their watery graves, an expression of resigned implacability on their tired faces.

Yet while the river continues to inveigle her prey, inch by sodden inch, The Warren Estate persists with its page-one status in the brochures of local real estates. It is the ever-enduring wet-dream…

The Kelpie and I walk on, the river warbling her sordid siren song… 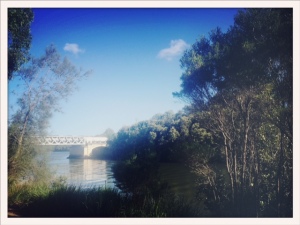