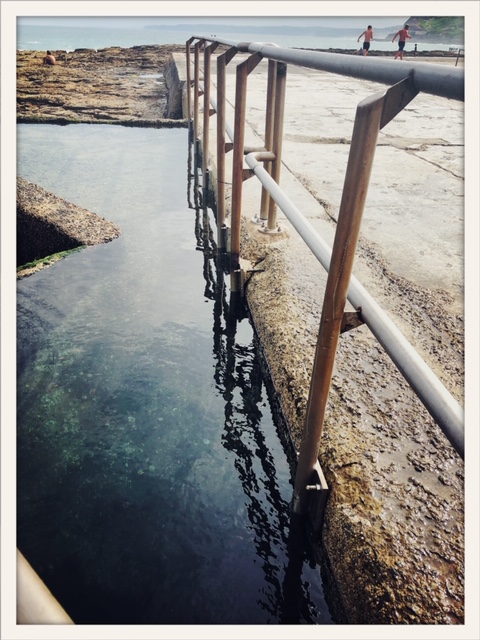 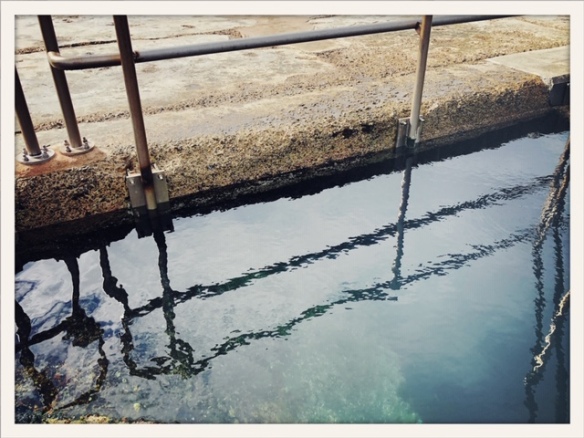 Renegade and tumbledown, Newcastle Ocean Baths are a still life in concrete and rust, skeletal girders and pockmarked slabs slick with the patina of summer: ice-cream wrappers wrinkle and skid bombing gracelessly into the depths, cream is smeared on lips and hips, its oily sheen rainbowing the water, and drifts of sand and chicken salt cling to the softest part of toes. 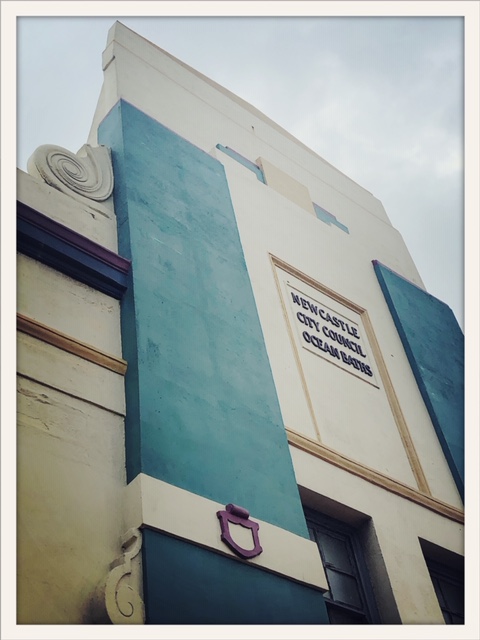 An echo of a simpler life, the utilitarian beauty of the baths is scorched, degraded and rusting alive, concrete cancer a virulent viral decimator. Band-Aids swarm the drains, bawling nanas corral their ratbag charges with promises of sweaty pocket-fluffed lollies, and the lifeguards are snoozing in splintered towers.

Clouded green shadows entice the Tin Lid and his besties in, a concrete bollard chained to the depths their end game. Snorkelled up, riots of high-vis swimmers crowd the ragged edges, soft skin splitting and weeping. Bombing, howling, stalking and raging with delight, they trawl through sun-stretched days, exposed hides pinking in delight.

Amid a haze of saltwater, Winnie Blues and tea in polystyrene cups, ice-cream-crusted piccanins barrel into crumpled mothers endlessly searching for lost thing, while goggles get smashed…

The cool depths of this one-time deco darling are a magnet, drawing swimmers, lovers, pirates, hippie-chicks with salt-crusted locks and old men who gamble using long-dead crab carcasses. It is a microcosm of life at the water’s edge and the epitome of cool relief on a blistering day. 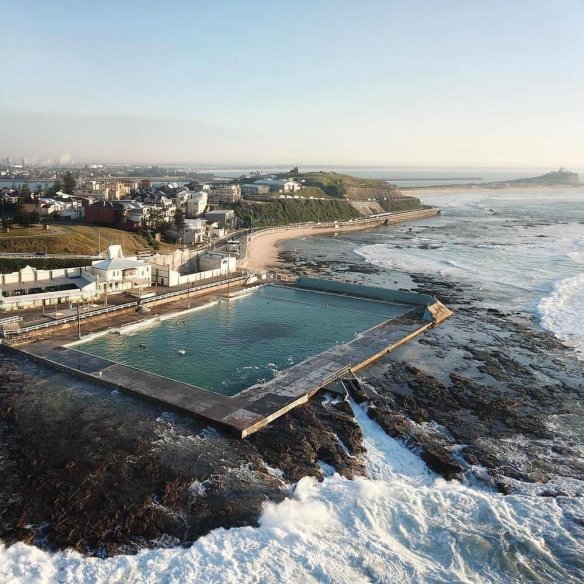 The baths and pavilion crest the edge of the world on a wave-cut platform, a lifeline between ocean and earth. Opened in 1922, at one time this was a sparkling jewel in Newcastle’s mercantile crown. Today, authorities bluster and frown, conservation vs gentrification an epic battle of wills. The Young Mariner’s Pool was carved out of the stone for the ‘tinies’ in 1937 but was so popular with all ages it had to be extended. Today the Canoe Pool is a glorious knee-deep wonderland, crusted edges, flaky form and brimming with bodies. 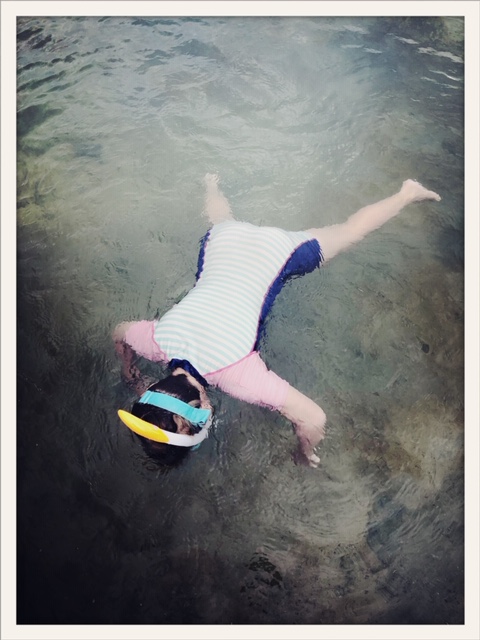 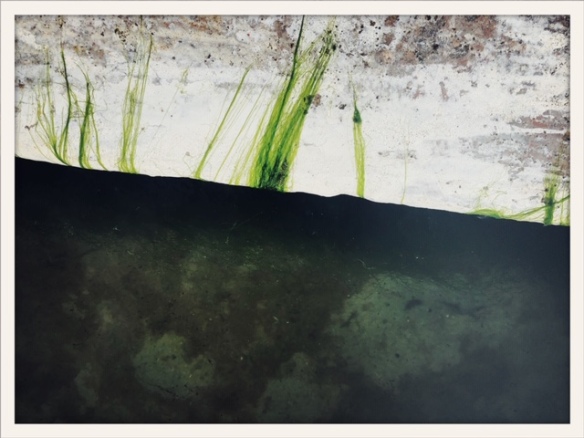 A turquoise geometry defines the business end of the baths, numbered pedestals queuing for attention, bleachers bleaching in shards of light, spectators blooming like algae on wet rocks when the races are on. 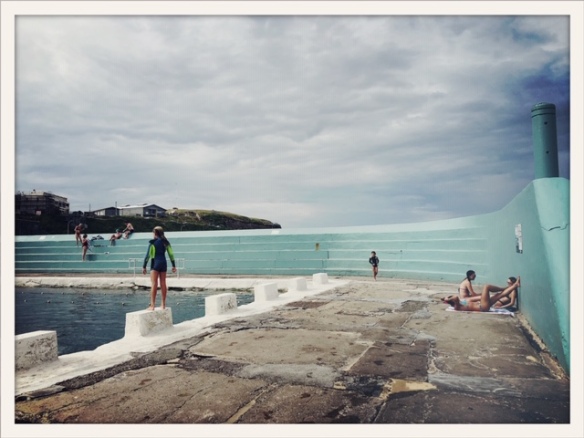 Beyond, however, is the land of big rollers, endless pounding walls of water that drench and scour. Storm drains peel from fragments of land with bite-size jags, spewing water in effervescent efficiency, and ocean crevasses swallow your mind whole, a one-way trip to Narnia bathed in acid-green kelp.

Here council approved ‘protection from the elements’ dissolves pitifully into the raw fabric of the earth, studded as it is with razor-sharp rock, staunch in the face of crashing surf, sluicing tides and the stink of decaying flesh. This is an entirely new reality, and one the children, unsurprisingly, take to with alacrity… 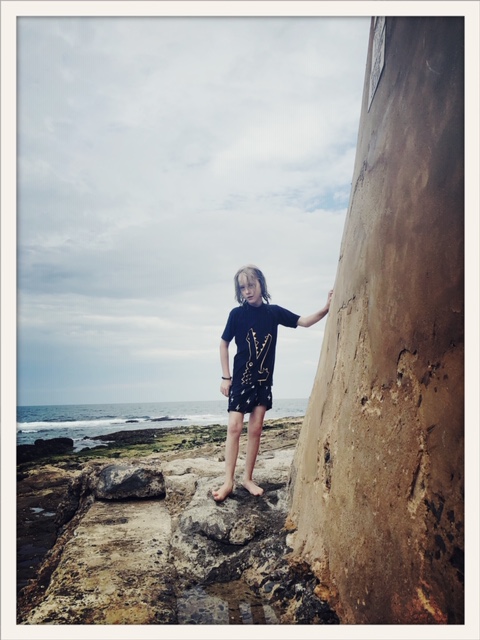 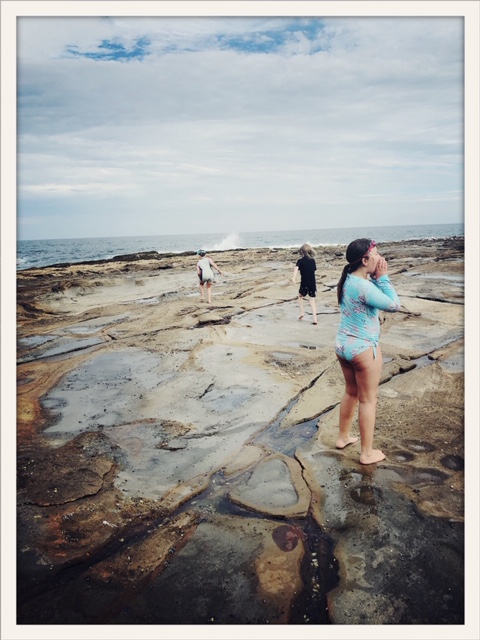 This is the land of trawlermen and surfers, back-flipping teens on the hunt for fresh-fleshed girls and a mob fishing for flatties off sea-grass rocks. Memories are enshrined, shrines memoried, and shadows cast long.

Roachy, La Punk, the Waterman and the Cowrie Hole boys send their love.

Frilled out into the endless blue, this scratch of land holds endless adventure, roaring with sound and spray. Its depths are watery homes glanced through glass, its heights cumulus nimbus curls.

And it is home, for a short while, a reminiscence of childhood, the immediacy of now palpable. 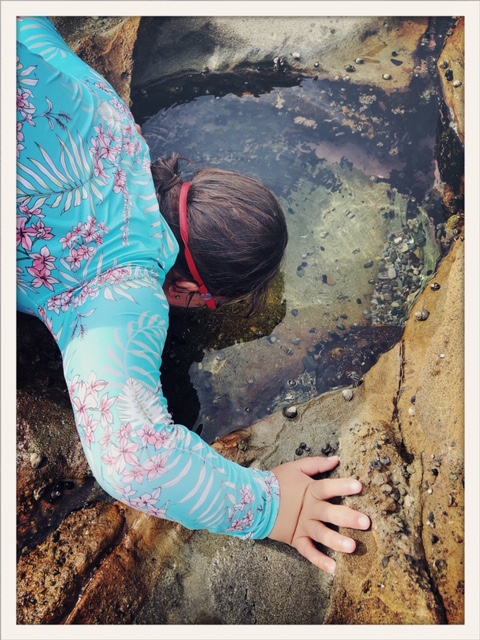 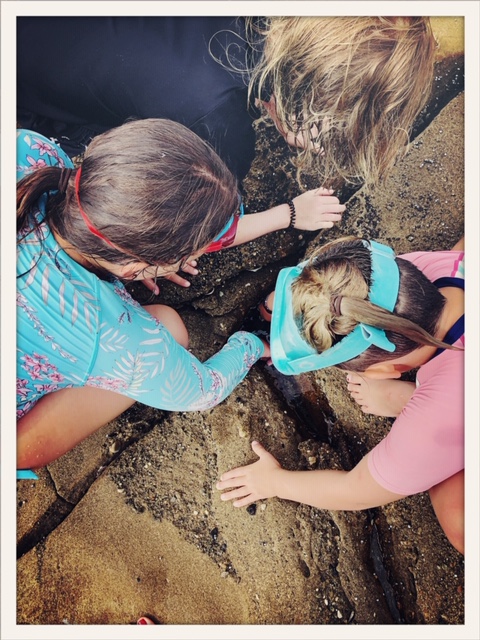 Time feels inert as if stolen from another generation and laced with the narrative of a simpler story, a no-frills nuance on reality. It offers up a borrowed sense of freedom while sluicing free the anxiety and exhaustion that shackles itself to us all, the aggressive silent partner in this modern-day marriage.

With crabs clutched in salty hands, tangles of hair sucked dry, we straggle home as the light fades, the only recourse hot chips beneath a mantle of cawing gulls and teenage attitude. 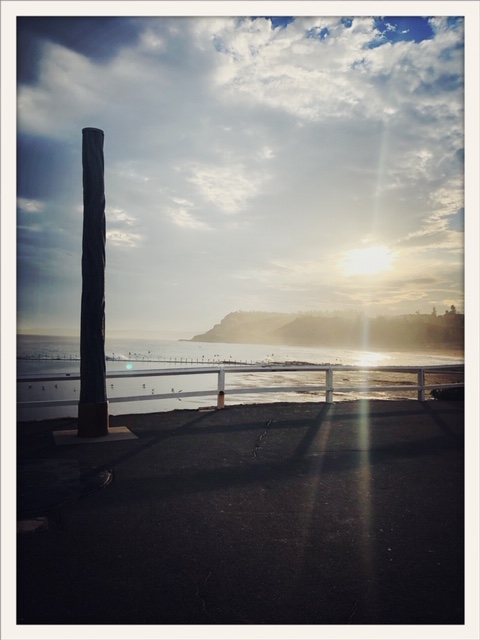